Couple of “Mestizos”
Articulated figures, carved and painted wood, natural hair, glass eyes and original clothes made in pineapple textiles.
Jewels and complements made in gold and tortoiseshell.

We present this very rare pair of early 19th. century figures, who embody the typical couple of mestizos in Manila during that period.

In Philippines is considered “mestizo” anyone who was a descendant of the mixture between the spanish and the natives.

Each figure is well made by a refined wood carving and polychroming work.

This artisan virtuosity’s complete by the fact that both figures are articulated in their shoulders, elbows, hips and knees, giving them a graceful mobility which allows  a great variety of positions.

To their impressive realism, contribute the eyes, which are made in glass paste. The hair and the eyelashes are made in natural human hair.

In addition, it should be noted the attention paid to the two armchairs, in carved and gilded wood. Whitout doubt, they were made expressly for each figure.

Just looking in detail the couple presented here, it’s possible to appreciate how were the costumes used by the Manila wealthy class  during the first half of the 19th. century:

The colorful “ikkat” dyeing textile (typical of Manila), the delicate embroidered patterns of the Gentleman’s shirt (Barag) and the peculiar scarf that the lady’s wearing over her shoulders (Alampay), which also was made exclusively in Manila.

In Philippines, meztizos were frequently distinguished from the rest of the population for their Mediterranean physical: aquiline nose, dark wavy hair, sallow skin… But also for their good manners and their “European” style and cloths:  pay attention to the Gentleman’s top hat (which used to be imported from the “Old Continent”), or to his sophisticated trousers.  However, it’s funny to see how they used to take some liberties  because of the high heat, as the case of the shirt which was used outside the trousers.

Furthermore, it was common to use an umbrella  to protect the skin of the sun, as it’s shown in the mestizos characters represented in the album of watercolors “Customs of Manila” by Justiniano Asunción (1841). Today at the National Library of New York City. (Photos 1 and 2).

The ladies were so proud of her jet-black hair, that they used to style it with beautiful combs and headdresses, as it’s possible to see in our mestiza. They payed special attention in the hair’s care, applying coconut oil to improve its brightness and good growth. It was often that the ladies’ loose hair came up to their knees, and even to the heels.

Besides the hair, the other thing well appreciated by the philippine mestizas was their tiny shoes. These beautiful and elaborated shoes used to be very small, barely enough to cover the toes, and  their manufacture were so delicate that ladies used to remove their shoes before crossing a muddy field, and only after arriving home and having washed their feet, they wore their fine shoes back.

In contrast to the european ladies during that period, who used to wear the “hoop skirts”,  in Philippines, the ladies weren’t in favour of deform their figure using”false volumes”. Instead, they used to war the “cabaya”, which is the long purple textile piece which covers our female figure’s legs.  The”cabaya” was firmly wrapped around the body and hooked up in torso’s area, with a pin. 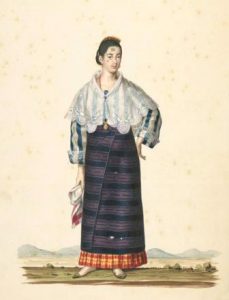 We have to mention the precious jewels, which small size indicates that surely were expressly made for these figures (it’s possible too that they were chosen between the owner’s personal ornaments): two crucifixes in gold, earrings made in the same noble material and the lady’s comb (mad in gold and tortoiseshell), all worked with an extraordinary fineness.

Moreover, catholics pendants make a clear reference to the close relationship between the mestizos and the Church’s missionary work, since the 17th c., to evangelize the indigenous population.

This was possible because Mestizo were the only who could dominate the Spanish and the Chinese, bringing about the translation of the Sacred Scriptures for the sangleys (Chinese people in the Philippines).

For that reason, there are some royal decrees (since the early years of  spanish colonization) which promoted foundations to accommodate all  the orphants mestizos, assisting and educating them for their future integration into society.

Regarding the curious appearance of the pair of figures presented here, it should be mentioned that since the early 19th c., european people developed  a strong interest in the  “Tipos del País” dolls, clearly loved by the adults, who were interested in the exoticism that was demanded by the  Romanticism and the progressive Nationalist movements.

In conclusion, because of the remarkable quality of the carving  and the polychroming work in these extraordinary figures; and because of the great value of their original textiles and accessories, we can confirm that these “dolls” were never made as a child’s toy; but as a faithful witnesses of their time. A couple of great rarity with rigorous documentary value, which shows in detail how were the habits of the mestizos’ culture, which it’s still an enigma to discover.

No products in the cart.